We’re delighted to share the Mass and these wonderful talks from Fr. Ricardo Pineda, CPM.

For your convenience, we’ve placed one video per page. When you are done with a video, click the link below the video player to go to the next video!

1. The Holy Sacrifice of the Mass, feast of St. Ignatius of Antioch (October 17)
2. Our Lady’s Call to Prayer
3. The Need for Reparation
4. The Glory of Suffering: Embracing the Cross

Fr. Ricardo’s Biography:
Fr. Ricardo was born on August 4, 1987, into a Catholic family of both Salvadoran and Mexican descent. He is the fourth of five children, and a native of San Diego, California. Following high school, he attended the University of Notre Dame in South Bend, Indiana. While in studies at Notre Dame, he played trumpet in the marching Band of the Fighting Irish. In May of 2008, he graduated from Notre Dame with a Bachelor of Arts degree in Philosophy and a minor in Theology.

Fr. Ricardo began hearing a call to the priesthood as early as age 6, but it was not until his freshmen year of high school that he began serious discernment of his vocation in prayer. This discernment continued throughout high school and college. After learning more about the vocation to priesthood as well as the vocation to marriage, he discovered that although the thought of marriage made him happy, he understood that he would be happier as a priest, serving God for the salvation of souls. So by the end of his second year at Notre Dame, he had accepted God’s call to the priesthood with a firm “Yes!” In time, he further discerned a call to the religious life.

Fr. Ricardo joined the Fathers of Mercy as a postulant in July of 2008. Following his one-year novitiate, he professed his first year of temporary vows of Obedience, Poverty, and Chastity on August 14, 2009. He graduated from Holy Apostles College and Seminary and was ordained a priest for the Fathers of Mercy in May of 2013. For three years, he served as an associate pastor of four small parishes in the Archdiocese of Louisville. In June of 2016, he was resigned to the Fathers of Mercy Mission Band. He also currently serves as the community’s Treasurer General.

The Holy Sacrifice of the Mass, feast of St Ignatius of Antioch with Fr. Ricardo Pineda

Click here to go to the video for Our Lady’s Call to Prayer. 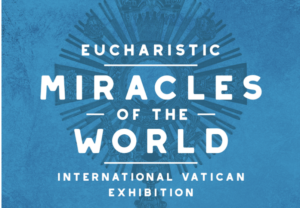 Support the Marian Center with your gift!